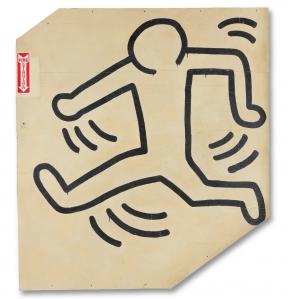 The Museum of Contemporary Art Denver is now hosting a unique exhibition of Keith Haring’s Grace House Mural, a site-specific painting created in 1983-84.

NEW YORK, NEW YORK, US, July 24, 2021 /EINPresswire.com/ — The Museum of Contemporary Art Denver is now hosting a unique art exhibition featuring Keith Haring’s Grace House Mural, a site-specific painting executed by the iconic pop artist in 1983-84 for children living at Grace House. It is the first time the artwork gets publicly displayed at the museum after being extracted from the walls of a Catholic youth center in Manhattan. The installation consists of 13 panels and additional elements used by Keith Haring in the original design, including the mailbox, the plaque, and two doors that were once integrated into the interior space of Grace House. The exhibition runs at the Museum of Contemporary Art Denver through August 22, 2021.

Keith Haring: Grace House Mural highlights some of the most iconic motifs and images attributed to the prominent American artist. These include the “Radiant Baby,” “Barking Dog,” and dancing figures, among others. The exhibition has a profound significance in terms of art preservation since these murals are an essential part of Haring’s legacy. The artist created 45 pieces during his lifetime, and only less than half of them have survived to this day.

Keith Haring (1958-1990) was a popular artist and public activist of the late 20th century. Along with his contemporaries Andy Warhol and Jean-Michel Basquiat, he was an integral part of the New York art scene, whose vibrant pop art emerged from the graffiti subculture of the 1980s. His one-of-a-kind style and vivid techniques are instantly recognizable and highly valued in the art market. Haring is best known for his colorful, energetic, and often humorous art that, despite its serious social and political messages, has a unique ability to bring people together and unveil thorny social problems through optimistic images.

Grace House Mural is a good example of how the artist masterfully depicted the dynamics and movement of the elements. It is a somewhat primitive and direct approach to making art. Fluid lines, chaotic symmetry, and tremendous vitality make Haring’s art second-to-none. Keith Haring passed away at the age of 31 on February 16, 1990, taking his art off the pedestal and giving it back to people. That is how the legend went down.

Keith Haring: Grace House Mural at the Museum of Contemporary Art Denver is not only a resurrection of Keith Haring’s iconic murals but also a humble homage to his respected figure. The art exhibition is supported by The Fries Foundation, First Western Bank, and Jonathan & Amanda Alpert. The curator of the event is Nora Burnett Abrams, Mark G. Falcone Director. Keith Haring: Grace House Mural is on view at the Museum through August 22, 2021.