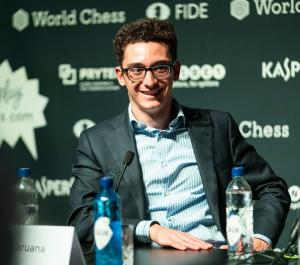 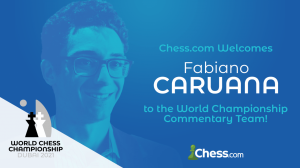 Chess Grandmaster Fabiano Caruana has unparalleled insights into world chess championship matches and also on the champion Magnus Carlsen himself.

You don't really know what you're getting into until you're actually sitting down for the first game… No matter how many tournaments a top player has played, it doesn't compare to playing the match.”
— Chess Grandmaster Fabiano Caruana

PALO ALTO, CA, UNITED STATES, August 2, 2021 /EINPresswire.com/ — Chess.com is thrilled to announce that Grandmaster Fabiano Caruana, the 2018 world championship challenger, #1 rated American chess player, and longtime #2 player in the world, will be a Chess.com commentator for the 2021 World Chess Championship!

Caruana's unparalleled insights on world championship matches and on the champion Magnus Carlsen are sure to give fans a remarkable experience during the event. After nearly winning the 2016 Candidates tournament, Caruana took home the 2018 Candidates by winning his final two games, earning his spot in the 2018 World Chess Championship. On the chess world's highest stage, Caruana impressively went undefeated in 12 classical games against Grandmaster Magnus Carlsen, including pushing Carlsen to the limit in their sixth game.

Caruana's many accomplishments also include a historic run at the 2014 Sinquefield Cup, with a perfect 7/7 start in one of the toughest tournament fields in history on his way to a three-point victory. He defeated every participant in the field, including Carlsen, at least once in that tournament.

To celebrate the great news, Chess.com has started a contest open to the chess community. Anyone who shares a Caruana game using #WorldChessChamps on social media will earn a chance to win a three-month diamond Chess.com membership, a $42 value!

Millions await the first move of the most anticipated chess event of the last two years as Grandmaster Ian Nepomniachtchi takes his shot at dethroning the reigning world champion Carlsen. Set to begin on November 24, the match promises to be one of the most thrilling in chess history.

Chess.com is the best way for everyone to enjoy the ultimate chess match—the world championship! With a team of heavyweight commentators and live camera feeds on all broadcasts, no one will miss a single detail of the event, from deep analysis of key variations, to closeup views of the intense concentration required to play the best chess in the world.

Chess.com will have exclusive camera access on Twitch, putting viewers right there in the playing hall with the players, so tune in at https://www.twitch.tv/chess.