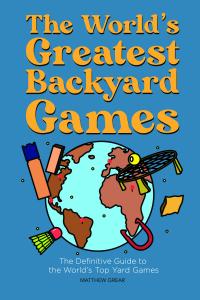 BOSTON, MASSACHUSETTS, UNITED STATES, August 4, 2021 /EINPresswire.com/ — Games have been a part of life for cultures dating back thousands of years ranging from the ancient Greeks to the American tailgater of the Internet Age.

Yard games guru Matthew Grear’s first book, The World’s Greatest Backyard Games ($19.99), is the definitive book on the top yard games from six of the world's seven continents. This encyclopedia of yard games leads readers through the ins and outs of the world's 28 greatest lawn games ranging from classics such as Spain's Caliche and Native American's Cherokee marbles to newcomers such as the U.S.'s Spikeball and Ethiopia's Korbo.

Grear, the founder of Yard Games World, is a yard games addict and spent the past three years researching and writing a guide to the greatest games from around the world. The book was released Tuesday via Prensa Press.

Grear, who broke the world record for longest cornhole toss in June, has turned into a walking yard game over the past few years since launching Yard Games World in Boston. He hosts tournaments. He reviews new games. He researches old ones from around the world. He rents out games, consults for game makers and is even working on creating his own game (top secret for now.)

The book is available in major retailers nationwide.

About Matthew Grear: Matthew Grear is a yard games enthusiast who is quickly growing into one of the leading voices and proponents of the yard games movement. Matthewâ s ballooning presence in the yard game community, as well as his social media account and website yardgamesworld.com, are positioning him as the expert in outdoor games.

About Prensa Press: Operated out of dual studios based in Mexico City and Chicago, Prensa Press is a boutique publishing house and creative studio founded in 2018 by Paul Biasco and Polly Jiménez. With a mission of working with passionate writers, chefs, artists, architects, designers and dreamers to help craft and bring their stories to print, Prensa brings a flexible approach to each project. More information can be found by visiting www.prensa.press.