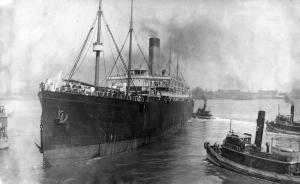 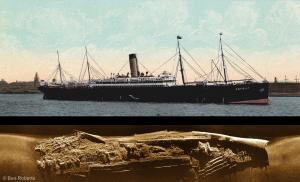 Final preparations are being completed for the recovery of the largest sunken treasure in history, The Tsar's Treasure lost aboard the Royal Mail Ship Republic.

The more you dig into the research and you learn about Republic and the circumstances and secrecy surrounding her loss, the more you get hooked. This is it, this is the big one.”
— Grant Bayerle

MIAMI BEACH, FL, USA, August 10, 2021 /EINPresswire.com/ — Forty years ago today, on August 12, 1981, Capt. Martin Bayerle located a previously unidentified shipwreck located about 50 miles south of the island of Nantucket, Massachusetts. That unidentified shipwreck would later prove to be the Royal Mail Ship (RMS) Republic, which was what he had hoped to find after a couple of years of research. The Republic was a 585-foot long, 15,000 ton luxury liner of the White Star Line that sank in January 1909 after a collision in dense fog with another ship. Before Titanic sank in 1912, Republic had been the largest ship to sink in history. Her nickname became the Millionaires’ Ship for all the wealthy passengers she was carrying. But beyond her passengers, Republic’s sinking is notable for something much more. Within days of the sinking reports began publicly circulating that she was carrying “a large sum of money” on board, details that would soon transform into a secret treasure containing “riches beyond most men's wildest dreams.” The RMS Republic has remained a staple of treasure lore ever since. Recent appraisals by world coin experts place the prospective value of the recovery from $200 million to more than $7 billion, depending on the coin cargoes and their condition.

Well, Capt. Martin Bayerle and his team of researchers and salvage professionals are not “most men.” Republic has captivated Bayerle’s imagination now for more than 40 years. While he has had a rollercoaster ride of a life, the most recent events have been on the upswing. In 2011, Bayerle’s company, Martha’s Vineyard Scuba Headquarters Inc. (MAVIS) was awarded legal title to the wreck and cargoes by the U.S. District Court in Boston after spending decades in court. As owner, there was no longer a need to keep all his research and operations secret. In 2013, with the help of his son, Grant Bayerle (a California lawyer), the two released a book about Bayerle’s quest and research into Republic titled “The Tsar’s Treasure”. The book quickly generated interest by production companies and in 2015, History Channel picked up the story for a series, “Billion Dollar Wreck,” which captured the story through 9 episodes and was televised the following year in over 90 countries and seen by tens of millions of people. Since the book and series have launched, the Bayerles have focused on the big prize, setting up a company, “Lords of Fortune LLC” (named after the ancient Roman Goddess of Luck – “Fortuna”) which is designed to make the final push for the gold, still believed after more than a century underwater to be buried deep within an undisturbed section of wreckage. Recent scans obtained by diver and maritime explorer Ben Roberts of Eastern Search and Survey support that contention. Republic, despite her age, still looks like a very attractive target for the swashbuckling investor who doesn’t mind a bit of risk.

Roberts obtained the images as part of a very impressive multi-month marathon of scanning nearly 200 wrecks off the U.S. East coast this summer. The particular images of Republic were captured with permission of Republic’s owner, Bayerle’s company MAVIS. The images show a wreck beaten on by the sea, but relatively intact after more than a century underwater. “The recent survey is highly encouraging. It substantiates that our Area of Interest where we believe the gold chamber to be remains intact, undisturbed, unexcavated, unexplored – still buried by 3-4 collapsed decks and under thousands of tons of twisted beams, steel plates and debris. Ironically, there probably isn’t a much safer place to store 53 tons of gold coins than where they currently rest.” Bayerle states.

The images are icing on the cake for launching their historic recovery expedition set for Summer 2022. Of course, such an expedition comes with a hefty price tag. “Operations will run approximately $115,000.00 per day. For such a large wreck we have lined up some of the most advanced and heavy-duty salvage equipment in the world, the same barge and kit that was used to raise the Costa Concordia. If all goes according to plan, and our research and information is correct, we believe we can excavate through the wreckage and start pulling up boxes of gold coins within weeks,” Bayerle said.

Bayerle advises that there are two offerings out currently, one of which is a Regulation D 506(c) offering available for accredited investors through its Lords Of Fortune website which demands a larger investment but provides more upside potential on the return. For regular investors, the team is also “testing the waters” through a Regulation C crowdfunding campaign through WeFunder, which offers some investor perks along with a nice potential ROI, with an investment of as little as $100. For a bet of $1,000,000+ you can don an underwater Iron-Man style Exosuit or ride in our five-passenger submarine and venture down to the shipwreck yourself to explore and hopefully pluck some gold coins. For the smaller investors, for as little as $100, you'll be entered into a drawing to win that adventure for three winners. Between the two offerings, Bayerle states there are already commitments for more than $1.5 million in place.

This all is shaping up to be a truly historic pursuit. Republic is the largest treasure ship in history with perhaps the most valuable treasure in history. “We want to share in the adventure and give everyone an opportunity to participate, if they would like,” Grant Bayerle states. “I firmly believe this will go down as the greatest treasure recovery in history. I wouldn’t be here if I did not believe we would be successful. The more you dig into the research and you learn about Republic and the circumstances and secrecy surrounding her loss, the more you get hooked. This is it, this is the big one.”