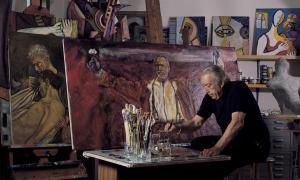 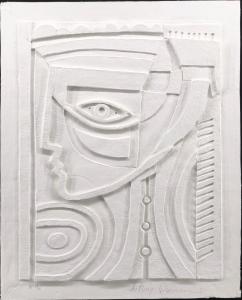 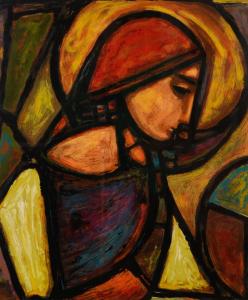 The campaign includes media and trade relations for international cultivation on behalf of Anthony Quinn’s iconic catalog of highly valued works of art.

Examining Quinn's many expressions of creativity together—his art, collecting, and acting—we can see that he was a creative genius.”
— Donald Kuspit, Art Critic

Workhouse (https://www.workhousepr.com), one of the country's leading public relations and integrated creative agencies, today announced that it has been selected as Agency of Record for The Anthony Quinn Estate (https://www.anthonyquinn.com). Quinn's iconic catalog includes thousands of highly valued works of art, from paintings, drawings, prints, and sculptures created in a wide range of media, from pencil and oil paint to marble and wood. As a PR agency of record, Workhouse will direct a program of international branded visibility to the Anthony Quinn Estate, including partnerships, promotions, sales, and exhibitions. The assignment is effective immediately.

Anthony Quinn (1915-2001) was a creative tour de force. Best known for his roles in more than 160 films, television programs, and theater productions —earning him two Academy Awards, six nominations, and the Golden Globe's Cecil B. DeMille Lifetime Achievement Award — Quinn was also a writer and visual artist who spent almost a decade living and working in Bristol, Rhode Island, where the preponderance of his work and collection still resides.

Housed within the Estate is a collection consisting of thousands of Quinn's sketches, paintings, sculptures, artifacts, including his workbenches and tools, manuscripts, diaries, personal correspondence, films, rare photos, recorded interviews, and his book collection of more than 9,000 volumes.

It would seem from the breadth and scope of his artistic production that Quinn never stopped creating, not even for the few minutes between scenes on a movie shoot when he produced small sketches in pen and marker by the dozens.

An abundance of art created in a modern Expressionist mode draws inspiration from a wide range of sources, including Picasso and Matisse, to African sculpture and Mexican representations. Quinn's content ranged from abstract geometric and organic forms to portraits and figure studies, and landscapes.

A ferocious observer of the world around him, Quinn had a burning desire to interpret and make sense of his surroundings using whatever artistic tools he had available, whether that be his body and voice, a paintbrush and canvas, or a block of wood and some carving tools. It is precisely this Duende, which also comprises a dark and restless spirit, that fueled Anthony Quinn's prolific artistic career.

This is most evident in the sheer volume and range of the artwork he produced and the ways he pursued various forms repeatedly as if trying to get at the essence of something by exploring it from several different angles using different tools and media. A small sketch inspires a clay maquette that inspires a wood sculpture that manifests itself in an oil painting.

His endless pursuit of creative truth—of those magical, haunting moments of inspiration—led him to use his entire body, mind, and spirit to make beautiful objects and deliver award-winning performances.

Quinn's enormous body of artwork highlights a hidden creative process. His artistry examines several recurring themes: the female figure, mother and child, abstract geometric and organic forms, and portraits. His work features drawings, paintings, and sculptures in different scales (from minute to massive) and materials (from ink to alabaster) to demonstrate the unfolding and dissecting of particular ideas and themes.

As a prolific sculptor, Quinn's development began with sketches and drawings that he created while traveling during his film career. He carefully contemplated each form, finding just the right balance between the negative and positive space, and visualized them on a grand scale. Quinn later translated the sketches into wooden maquettes.

He worked meticulously developing the proportion and dimensions of each and studied them from every angle to see how light and shadow played on their contoured surfaces. He caressed them with his hands, internalizing their beauty and energy, envisioning them as larger-than-life sculptures.

Frank Lloyd Wright, with whom a young Quinn did an internship that helped launch his acting career, told Quinn that his goal was "to live and create to the size of the spirit of man."

Quinn adopted this as his motto, and as demonstrated in part by his illustrious career and abundant artistic production, he most certainly lived up to it.

In his lifetime, success was predicated on hard work, dedication, and the influence of great artists and pioneers with whom he crossed paths: Frank Lloyd Wright, John Steinbeck, John Barrymore, Errol Flynn, Marlon Brando, Charlie Chaplin, Laurence Olivier, Spike Lee, and many others. Although he was best known for his work in film, throughout his life, he developed an equal significance as an artist across many different media and stayed involved and engaged in civil rights activism and many humanitarian causes.

"Quinn's paintings show Expressionist energy and distortion. Color is often abrupt, standing out from the image with sensuous autonomy. Quinn rebounds to intimacy in his portrait sketches. To me, they are his most expressively intriguing as well as stylistically varied work. Face after face appears, like memories from the past, captured in their transience, yet durable." – Donald Kuspit, Art Critic and Professor of Art and Philosophy, Ph.D., Stony Brook University.

Artwork by Anthony Quinn for sale is sold exclusively and directly by the Anthony Quinn Estate produced by the artist before his death, authenticated, and each is in mint condition. For more information, visit https://www.anthonyquinn.com

The Great Spirit – by Anthony Quinn