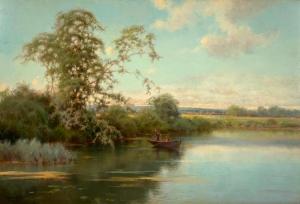 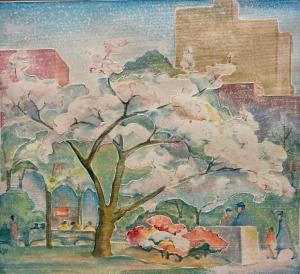 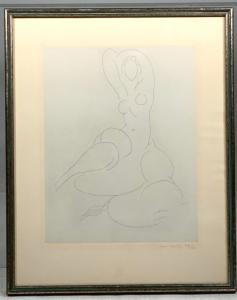 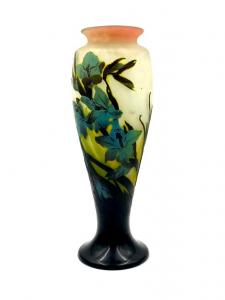 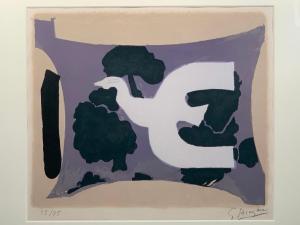 Offered will be works on paper, original oil paintings, a 75-piece glass collection (including Galle), Asian ceramics and more, beginning at 10 am Eastern time.

We are privileged to be offering many fine Mid-Century Modern pieces from a home in Akron, Ohio, where the interior designer was Isabelle Lichtenstein, the wife of the famous artist Roy Lichtenstein”
— Bridget McWilliams

BEACHWOOD, OH, UNITED STATES, September 15, 2021 /EINPresswire.com/ — Neue Auctions’ online-only Art & Antiques auction on Saturday, September 25th at 10 am Eastern time, is an exciting offering of more than 400 lots that include undiscovered finds in many categories. Most were acquired from regional estates and longtime collectors. Paintings, works on paper, glass and Asian ceramics will all come under the gavel.

Internet bidding will be facilitated by two platforms: Liveauctioneers.com and Invaluable.com.

“We are also privileged to be offering many fine Mid-Century Modern pieces from a home in Akron, Ohio, where the interior designer was Isabelle Lichtenstein, the wife of the famous artist Roy Lichtenstein,” said Bridget McWilliams, an appraisal services specialist at Neue Auctions. “In fact, Roy hung the curtains in the house. The couple worked there in the late ‘50s and ‘60s.”

Items from the home include a Japan Series upholstered teakwood lounge chair (1957), designed by Finn Juhl for France and Son (Denmark) and retailed by John Stuart (estimate: $600-$1,000); and a Jens Risom walnut two-part rectangular credenza, the left side with a hinged blind door and tambour door and the right side having four graduated long doors (estimate: $500-$1,000).

The outstanding glass collection comprises around 75 pieces in all and includes cameo glass and Victorian glass. The Galle pieces are expected to do particularly well. A few examples include:

Fans and collectors of silver will have much to consider, including a Gorham Buttercup sterling flatware service (estimate: $2,000-$4,000); a Towle sterling flatware service in the King Richard pattern in a fitted felt-lined case, weighing 90.66511 oz. troy; and several pieces of Old English silver, including a Hester Bateman sterling silver tea caddy from 1784 (estimate: $800-$1,200).

Fine furniture will feature an early 19th century English Regency marble top console cabinet on fluted columnar supports, painted in faux bois with gilded leaf design (estimate: $1,500-$2,500); and an 18th century Chinese Chippendale armchair with an arched crest rail over a fretwork back, with scroll arms and fretwork side supports above an upholstered seat (estimate: $1,000-$2,000).

A lovely collection of oil paintings by the American artist Andre (Gittelson) Gisson (1921-2003) will be offered, a couple with provenance tracing them to the Vixseboxse Art Galleries in Cleveland. They include Portrait of a Young Girl in a Lavender Hat and Portrait of a Girl with White Bow. Both are artist signed, framed, and carry identical pre-sale estimates of $400-$800.

Gisson works with loftier estimates include a beautiful oil on linen canvas Still Life with Flowers that’s signed upper right and housed in a 32 inch by 38 inch frame (estimate: $1,000-$2,000); and a colorful and vibrant oil on canvas Parisian street scene, signed lower left and with a canvas size of 24 inches by 12 inches (sight, less frame). It’s expected to change hands for $600-$1,000.

Returning to the house in Akron, other Mid-Century Modern treasures include a circa 1950s-‘60s Massimo Vignelli for Venini pendant glass lamp having a conical shade with concentric rings in blue, green, maroon and plum colored glass (estimate: $400-$700); and a Charles and Ray Eames rocker for Herman Miller with a molded fiberglass orange seat (estimate: $400-$600).

Other Akron house pieces will include a circa 1950s-‘60s Venini pendant glass lamp, 11 inches tall, with an expanding pattern of vertical stripes in yellow and red (estimate: $400-$700); a Ludwig Mies van Der Rohe Barcelona lounge chair for Knoll International, with black tufted leather upholstery on an X form chromed steel base (estimate: $700-$900); and an Eero Saarinen Womb chair and ottoman, having a steel frame and wool upholstery (estimate: $300-$600).