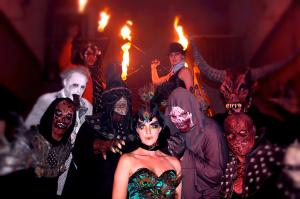 Queen of Haunts with Edge of Hell cast 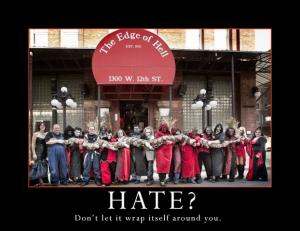 Hate – Don’t let it wrap around you 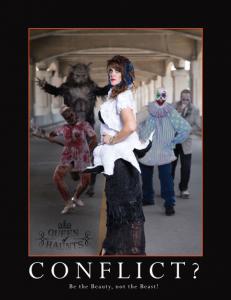 Conflict – Be the Beauty Not the Beast 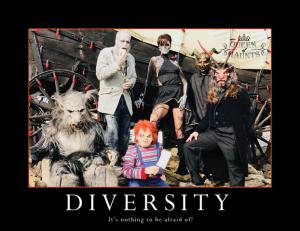 Diversity – Don’t let it scare you 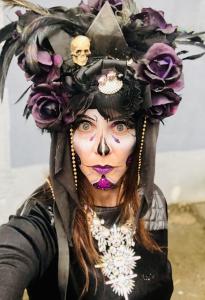 Queen of Haunts reigns the haunts: Edge of Hell, Beast, and Macabre Cinema

Even a place that takes pride in its art of scaring people for their entertainment finds it essential to give back.”
— Amber Arnett-Bequeaith, aka Queen of Haunts

KANSAS CITY, MISSOURI, UNITED STATES, October 15, 2021 /EINPresswire.com/ — The West Bottoms District, just west of Kansas City’s downtown, descended into blight with the diminished use of the historic stockyards and the catastrophic flood of 1951. This era, after the flood, generated naysayers who saw little value in the area, with their moans, growls, and boos. Ironically, as fate would have it, the decision in 1975 for the Edge of Hell Haunted House to move from the River Market to the West Bottoms was the beginning of the district’s transformation to a welcome destination again.

Amber Arnett-Bequeaith, also known as Queen of Haunts, and her family used much of their own resources and initiative to clean up the West Bottoms. Once Arnett-Bequeaith was old enough, she and her uncle, Monty Summers, helped lead the improvements, including restoring and repurposing the late nineteenth-century warehouses. Now, this centrally located, fashionable district only gets boos and howls from the cast members at their highly successful haunted attractions, Edge of Hell, Beast, and Macabre Cinema.

Edge of Hell is the nation’s oldest haunted attraction still in operation. While its theme of going from heaven to hell and phobias hasn’t changed, it continues to evolve to keep pace with the level of technology and advanced animatronics necessary to rank as one of the nation’s best.

The success of the area isn't limited to the haunted houses. Many of the multistory brick buildings are now part of one of the nation's most expansive indoor vintage and antique shopping district – spanning 13 blocks. Before the pandemic, over 20,000 shoppers visited during First Friday Weekends. Businesses are starting to return to pre-pandemic levels with the fun promotions and events led by Arnett-Bequeaith, co-president of the Historic West Bottoms Business Association.

The Queen of Haunts further leveraged the healing magic of haunts. Every year she encourages dog and cat food donations in exchange for discounted tickets to help Great Plains SPCA no-kill animal shelter. Bequeaith also makes it a priority to help children. One of the haunts' charitable favorites is participating in the "Don't Be A Monster" program. The Queen sends a costumed "monster" to talk to school kids about how to combat bullying.

“I love screams and laughter that I hear as people go through the haunt,” said Arnett-Bequeaith. “It is a reflection of happiness. We like contributing to that. So, even a place that takes pride in its art of scaring people for their entertainment finds it essential to give back.”

While the pandemic has limited access to schools, the Queen of Haunts has created inspirational posters that feature the haunt cast and positivity. One features the Edge of Hell’s record-breaking reticulated python with the message about hate – “don’t let it wrap itself around you.”

“Amber radiates a sweetness that is unexpected from someone leading the scary haunt world,” said Kayla Williams, owner of Sincerely Ellis clothing and jewelry boutique down the block from the Beast. “She lifts the spirits of those she meets and talks about the empowerment of women – queens of our own destiny. Her inspiration led me to create a queen line of jewelry that reminds the wearer of women’s empowerment. Overcome your fears and obstacles – who fits that message better than the Queen of Haunts.”

About Full Moon Productions
Full Moon Productions owns and operates world-class haunted house attractions since 1975 and has prioritized helping children and pet charities in the community, including the anti-bullying program “Don’t Be A Monster.” The Queen of Haunts reigns in all things haunted with a lifetime in the haunts, including the Edge of Hell, Beast, and Macabre Cinema Haunted Houses located in the West Bottoms Historic District off the 12th Street Bridge near Downtown Kansas City, Missouri.

Queen of Haunts talks about the making of famous haunted houses