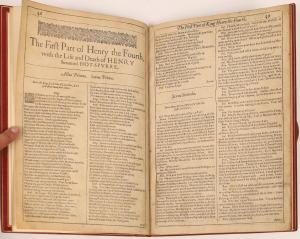 It’s impossible to tell what the fragment will ultimately sell for, but Holabird Western Americana Collections, which is offering it, has assigned it a modest estimate of $50,000-$100,000. 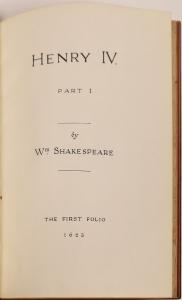 The fragment represents one complete play (in a two-part production of Henry IV) that was published in 1623 in England. Its new owner will be in possession of literary history. 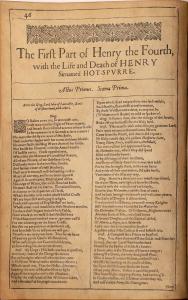 An exceedingly rare First Folio single play “fragment” of William Shakespeare’s The First Part of Henry the Fourth, published in 1623, will be sold to the highest bidder October 29th. 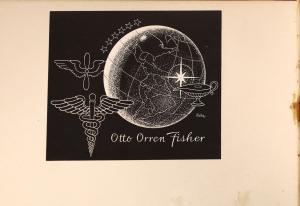 Inside the front cover is a custom book plate is affixed with the name Otto Orren Fisher, the late nationally renowned collector of rare books and manuscripts and the fragment’s former owner.

The fragment has been rebound in bright red patent leather and consists of 13 pages printed on antique Renaissance rag paper, originally numbered 46,49-62,65-73 in the First Folio.

We’re proud to present this original copy of a First Folio fragment of Shakespeare's The First Part of Henry the Fourth. Its new owner will possess literary history.”
— Fred Holabird

The auction is being held in the Holabird gallery located at 3555 Airway Drive in Reno. Online bidding will be via iCollector.com, LiveAuctioneers.com, Invaluable.com and Auctionzip.com.
The full catalog can be viewed online now, at www.holabirdamericana.com. For those planning to attend the auction in person, regulations and protocols regarding COVID-19 will be enforced.

The First Folio of Shakespeare's plays has been widely referred to by historians, collectors and scholars as the most important literary work in the English language. It is considered by most of academia to be one of the most important books ever published. It’s impossible to tell what the fragment will ultimately sell for, but Holabird has assigned it an estimate of $50,000-$100,000.

“The possibility of owning a piece of the most important literary work extant is a once-in-a lifetime opportunity,” said Fred Holabird, the president and owner of Holabird Western Americana Collections. “We’re proud to present this original copy of a First Folio fragment of Shakespeare's The First Part of Henry the Fourth. Its new owner will possess literary history.”

The work’s full official title is The First Part of Henry the Fourth, with the Life and Death of HENRY Sirnamed HOT-SPVRRE. The fragment represents one complete play (in a two-part production of Henry IV) that was published in 1623 in England, in the First Folio of William Shakespeare’s Comedies, Histories & Tragedies, Published according to True, Original Copies.

The First Folio was reportedly compiled and edited by two of Shakespeare’s actors and friends, John Heminges and Henry Condell. It was printed in London by Isaac Jaggard and Edward Blount. The fragment has been rebound in bright red patent leather and consists of 13 pages printed on antique Renaissance rag paper, originally numbered 46,49-62,65-73 in the First Folio.

As an original fragment of Shakespeare's First Folio, these bound pages are, by very definition, unique. Nowhere else exists a copy of Shakespeare's original, very first, professionally published copy of The First Part of Henry the Fourth that is identical to this one – from the provenance to the unique watermark design to the old Renaissance rag paper and gold-trimmed red binding.

Inside the front cover of the fragment, a custom book plate is affixed with the name Otto Orren Fisher, a nationally renowned collector of rare books and manuscripts. An industrial surgeon, Dr. Fisher began his hobby of collecting with the goal of owning one rare item in his lifetime. Upon his death in 1961, he owned more than 80,000 rare books that occupied three floors of his home.

Rare books containing the Otto Orren Fisher nameplate have surfaced all over the world, many donated to academic institutions’ libraries’ special collections departments, and others appearing in rare book auctions. There are very few sales of First Folio fragments published online, and none are comparable to this one, relative to page count, completeness, binding, and condition.

As Henry IV was one of the most popular of Shakespeare's plays at the time, copies of this play were highly prized and treasured, and therefore may have had a higher likelihood of surviving three to four centuries. It is possible Dr. Fisher acquired many different fragments of original Folios over the years as he was amassing his rare book collection. But that is pure conjecture.

It is safe to assume, though, given the time period of the binding and the name plate present, that Dr. Fisher had this fragment bound by the London firm Sangorski & Sutcliffe. It’s important to note here that one page is missing from this fragment: it’s printed on both sides and is numbered pages 63/64. Missing pages are rather common for authentic First Folio copies and fragments.

It’s likely the page was known to be absent at the time of binding. Often pages are lost to antiquity and authentic replacements can’t be acquired. According to Dr. Rasmussen, it is not uncommon for fragments and "complete" folios to be bound with many pages missing, as the rarity of original 1623 copies make compiling a truly complete copy of a single play a huge task.

The subject of missing pages has been a topic of much debate; specifically, of how many missing pages is acceptable before a 900-page First Folio no longer qualifies as "complete”. Put in the context of 400-year-old literature, and "complete" copies missing as many as 30-40% of the original pages, only one missing page out of 14 does not significantly affect the condition rating.

Overall, this First Folio fragment is in very fine condition. There are some small chips and tears on the edges of some of the inside thinner paper pages, and the paper is discolored in varying degrees from page to page, commensurate with the fragment’s age – 400 years old. During Dr. Rasmussen's inspection, nothing concerning about the condition of this fragment was noted.