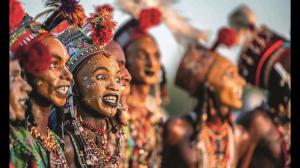 LaaWin is the platform based on quizzes & Social things for African people. The LaaWin platform gives opportunities to Learn about Africa.

PORT HARCOURT, RIVERS, NIGERIA, October 21, 2021 /EINPresswire.com/ — Somewhere in Africa, is a tribe whose custom allows a wife to get stolen. Wodaabes are Fula-speaking nomads found in Niger, Cameroon, Congo, and the Central African Republic Culture Values of Africans. They adopted Islam in the 16th Century but still cling to their old customs. At their annual Geerewol Festival, the men wear make-up, paint their lips, shave their front hairs, braid the back, and dance the “yaake” dance, while the women judge. The festival lasts 7 days, after which a woman can be stolen by a man. If she is already married, she will divorce her husband because polygamy is taboo.

Could you have ever imagined that somewhere in the world, there is a tribe whose custom allows one man to “steal” the wife of another at a festival and there is nothing the other man can do if his wife is willing to get stolen? Your imagination may never have taken you so far but thankfully you can do more than imagine because such a tribe does exist and it is called the Wodaabe tribe. Click here to know more Culture Values of Africans

The Wodaabes are a tribe of cattle and donkey herders, and merchants who trace their ancestry to the Fulani ethnic group. As herders, the Wodaabe tribe has engaged in extensive migration in the course of herding their cattle and so can be found across the African continent in Niger, Chad, Cameroon, the Democratic Republic of Congo, and the Central African Republic. But, they are predominantly found in the French-speaking country of the Republic of Niger and speak their native language called Fula. The Wodaabes are nomads and they travel over long distances on foot. The incredibly rich customs of the Wodaabe people allow them to wear elaborate and colorful traditional attires and engage in festivals that connect them to their past and traditional way of life.

Interestingly, though the Wodaabe people adopted Islam in the 16th century they continue to cling to their pre-Islamic customs and traditions. And these customs form the bedrock of their traditional festivals. Among the fascinating festivals of the Wodaabe people is the Geerewol Festival. This festival is conducted immediately after the rainy season. It is an incredibly communal affair, bringing members from across and beyond Niger for the annual ceremony. Learn History of Africa

The Geerowol “wife stealing” Festival is at its simplest description to non-members of the Wodaabe tribe who do not realize its cultural import a kind of male fashion parade where the men wear make-up and dance while the women watch and judge their performances. The Festival is in fact a traditional mating ritual that allows the men to show their beauty, skills, and stamina, and the women to select their husbands or sexual partners. it is a Culture Values of Africans In the hours leading up to the festival, the eligible men of the tribe prepare themselves by putting on a lot of make-up to accentuate their beauty: dark eye-liner to make the whiteness of their eyes more noticeable, dark lip paint to make their teeth appear whiter, ochre powder and white paint on their faces to make them more attractive, and on their noses to make them appear longer and straighter.

They braid their hairs after shaving the front to make their foreheads more prominent and wear their ceremonial robes accessorized with jewelry and feathers. When it is time to begin, the leader of the tribe shouts out a call to the people in their Fula language, asking them to begin singing their native hymn. The men participating in the ceremony stand next to each other in a line, facing the sun; then they begin to chant, sing, and dance, swaying their bodies and arms forward and to their sides, opening their eyes as widely as they can to show their whiteness and at the same time grinning for the same purpose. While the men are dancing, the older men and women cheer them on. This ceremonial dance is called “yaake” The Wodaabe men prepare for days before the festival to increase their stamina for continue of Culture Values of Africans
https://www.laawin.com/about-us

The festival lasts for seven days and each day the men dance for hours from noon until night at which time a bonfire is lit. On the last day, the judges who are women of high status pick the winner of the dance. The man picked by a judge also gets the privilege of having sex with her, and if she consents, divorce her husband and marry him. These options are available to the females of the tribe, who each pick the man that impressed them the most by simply pointing at him. Though the tradition of the Wodaabe people allows them to have multiple sexual partners, it is taboo for a man or woman to have more than one wife or husband. In most cases, husbands prevent their wives from participating in the festival to prevent them from being “stolen” away. Just when you think you know all there is to know about Africa, you encounter tribes with practices that blow your mind. And in case you need to be told, this is not an outdated custom, it takes place every year. Learn more about Culture Values of Africans.