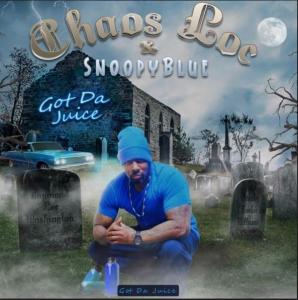 Success breeds hate and envy, but the tidal wave I'm riding cannot be stopped or comprised. With positive vibes I got da juice”
— Chaos Loc

Since then SnoopyBlue has gone on to release many new songs including his 2021 releases "Everybody Can't Go", "Roses", "Space Shippin", and "Stop Playin". West Coast rapper Chaos Loc who is currently incarcerated has accomplished another one of his positive goals by collaborating with SnoopyBlue. Many more Chaos Loc & SnoopyBlue collaborations are on the way.

"Got Da Juice (Feat. SnoopyBlue)" is a single off of the upcoming Chaos Loc album "Drill Seazon". This hot new single is a positive song that's letting the listeners know who has the juice on the music scene from Dayton, Ohio to South Central, Los Angeles. Chaos Loc is a rapper, author, film producer, and corporate businessman that got da juice in the music, book, and film industry. The "Chaos Loc: Corporate Coastin" documentary will be released in 2022. This film will feature the music video for "Got Da Juice (Feat. SnoopyBlue).