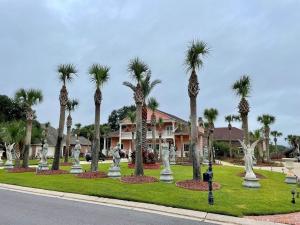 Sarkis Kaltakdjian’s home, which he named Palmira, was located in Prairieville, La. It boasted floor-to-ceiling shelving that housed thousands of collectible items. They are part of the auction. 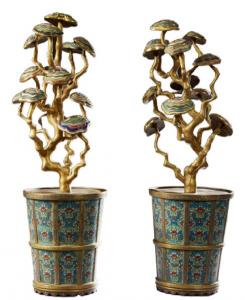 Pair of Imperial cloisonné and enamel lingzhi fungus jardinieres showing the raised Qianlong mark, with lids that are removable for use as jardinieres (estimate: $10,000-$15,000). 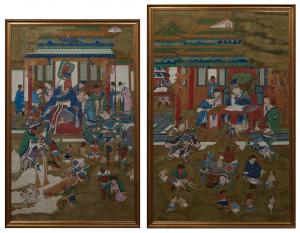 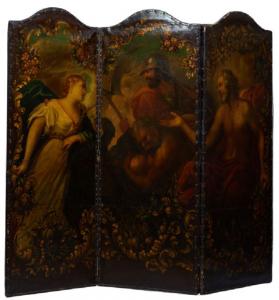 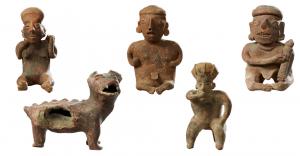 The auction features a great selection of pre-Colombian pottery, with each piece estimated at $300-$500.

Sarkis Kaltakdjian was a native of Damascus, Syria who studied interior design in Paris and eventually moved to Baton Rouge, La. It was there where he and his wife, Nora Keshishian, established Sarkis Oriental Rugs in 1976, which ran until 2015. Equipped with a unique taste and style, he collected an eclectic array of decorative art, paintings, and antiques throughout his life and travels. These very items are in the auction and present a unique opportunity for collectors.

The three-day, 1,100-lot auction will be held online and live in the Crescent City Auction Gallery showroom, located at 1330 St. Charles Avenue in New Orleans. The merchandise has been mostly pulled from prominent estates and collections across the South. Start times are 11 am Central for the November 12th session and 10 am Central for the November 13th-14th sessions.

The pair of Chinese watercolors on silk depicting The Ten Courts of Hell are from the 18th or 19th century and are possibly The Second Court of Hell with Yama: King Chujiang and The Ninth Court of Hell with Yama: King Pingdeng. The larger of the two measures 49 ½ inches tall by 29 ½ inches wide. They are being offered as one lot, with a modest estimate of $10,000-$12,000.

The pair of Imperial cloisonné and enamel lingzhi fungus jardinieres both show the raised Qianlong mark and have lids that are removable for use as jardinieres (ornamental pots or stands for the display of growing plants), with the interior showing a Sotheby’s Hong Kong label. The lingzhi fungus are 26 inches tall; the jardinieres are 9 ¾ inches tall (estimate: $10,000-$15,000).

A pair of 19th century patinated bronze statues by Louis Guillaume Fulconis (1818-1873), after Giovanni Giambologna (1529-1608), titled Mercury and Fortuna, on circular stepped black marble bases and standing 33 ¾ inches tall, is estimated to bring $1,500-$2,500; while a large pair of patinated spelter Art Nouveau busts of an Arab man and woman, crafted in the late 19th century and each one measuring 29 inches tall by 14 inches wide, should realize $1,000-$1,500.

Good things come in pairs, with estimates of $1,500-$2,500. The first is a large pair of 20th century polychromed bronze blackamoors on integral stepped bases, wired for lamps, with a frosted glass flammiform shade, 61 ½ inches tall. The second is a pair of large cast iron Campana form garden urns made in the 20th century, the relief rim over a side with relief classic figures, on a socle support to a stepped tapering plinth, each urn 40 inches tall and 30 inches in diameter.

Original artwork by noted, listed New Orleans and regional artists are offered at nearly every Crescent City auction. This one will be not exception. A few of the finer examples are as follows:

French period furniture is also a staple at Crescent City auctions. It will be offered in abundance. Two expected top lots, each with an estimate of $1,200-$1,800, are a late 19th century Louis XVI-style carved beech giltwood five-piece parlor suite consisting of a settee and four fauteuils; and a circa 1800 Louis XIV-style carved walnut commode, 30 ½ inches tall by 49 ¾ inches wide.

Exhibition previews will be held daily (except on Saturday and Sunday), by appointment only, in the Crescent City gallery, starting on Wednesday, Nov. 3. An evening preview will be held Tuesday, November 9th from 5 pm – 6:30 pm Central time. To schedule a preview appointment, call 504-529-5057, or, send an email to info@crescentcityauctiongallery.com.COVID-19 protocols will be strictly enforced.

Internet bidding will be provided by LiveAuctioneers.com, Invaluable.com and BidSquare.com. Absentee and phone bids will be accepted until 1 pm Central time on Friday, November 12th. A 25 percent buyer’s premium will be applied in-house (three percent discount for cash or check). A printed catalog is available; call 504-529-5057 or email info@crescentcityauctiongallery.com.

For more regarding Crescent City Auction Gallery and the Important November Estates Auction slated for the weekend of November 12th-14th please visit www.crescentcityauctiongallery.com.